The Police and I 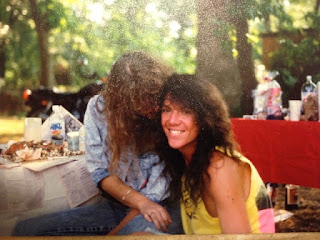 As I have noted on a few posts, I had rather long hair for the majority of my life (from the time I first saw the Partridge Family until just before I was received into the Church). This attribute gave me a small glimpse into what it is like to be profiled by the police, as there were numerous times I was pulled over for DWLH (driving while long haired), mostly without much drama, although once I did have guns pulled on me, yet another time I think the dude thought I was a chick and wanted to hit on me (something that does happen to a lot of young ladies I have been told).

The time that I could have been shot was in truth my fault, although it wasn’t until I was driving away that it all made sense. My 20 something still an atheist self was seeing a girl in Virginia, and we alternated weekends between my place in Baltimore and hers in Arlington, with me usually staying until early Monday morning and then driving to my bricklaying job from Virginia. A neighbor must have seem some long haired guy leaving the condo complex at 4:30 am with a duffle bag and assumed I was a bad guy. Driving only a few miles and I was pulled over, without the knowledge of why, or aware that I was supposed to stay in my vehicle, I got out only to see both officers pull their weapons and tell me to put my hands on the truck. I apologized for not knowing the “pulled over”etiquette and explained The Who-why-where’s as the one officer searched my truck and bag. They told me that had a report of a possible theft by someone fitting my description and then reminded me again to always sty in the car until asked.  They had been super aggressive at first, and turned quite nice and helpful after they “got the facts”.

My most memorable pullover, mainly because of the lesson I received, was when I was just about 30. Finished up a DJ gig one Saturday night near York, and was making my way back to 83 when I accidentally ended up on a One way street, something that did not go unnoticed by the uniformed man in the squad car. This officer, or so I thought, was the opposite of Andy Griffith, and was more than a little intimidating and stern. He could see in my Jeep all the sound equipment, which to a non-DJ could easily look like I just robbed a house or store. Luckily I had my info sheet on the front seat, and handed It to him with my license and registration. He checked out my information, called it in, and then asked me some music questions to gauge my DJ knowledge. Convinced I wasn’t a criminal, or at least not currently committing any criminal acts, he gave me directions to 83 and suggested I not go up any more one way streets.

Still shaken by this, especially as this guy was all business, I started to head back to Baltimore, but stopped at a 7/11 just before the entrance to the highway. I grabbed a Diet Mountain Dew for the road and as I was about to pay I heard “let me get that Mr DJ” and it was the tough cop, except he had a big smile on his face and I was now more worried he might hug me than arrest me. He bought my soda, wished me a safe trip and even said God bless.

On my way home I had the time to think about that situation, and how it’s most likely safer for police to be intimidating at first, and how it might be for many just an act they put on - being the alpha male as not to have problems. Eh, what do I know, but that being a cop, especially now, is a very hard job.
.

Posted by D'artagnan at 7:01 PM No comments: